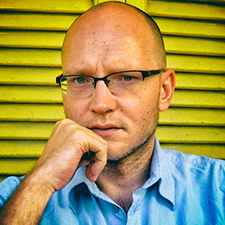 Sándor Jászberényi is a Hungarian writer and Middle East correspondent who has covered the Darfur crisis, the revolutions in Egypt and Libya, the Gaza War, and the Huthi uprising in Yemen, and has interviewed several armed Islamist groups. His stories have been published in all the major Hungarian literary magazines and in English in the Brooklyn Rail, Pilvax, and BODY Literature. His work represents a uniquely Hungarian twist on the tradition of the late, great Ryszard Kapuscinski, while also evoking the work of writers as diverse as Ernest Hemingway and Graham Greene

A War of Words