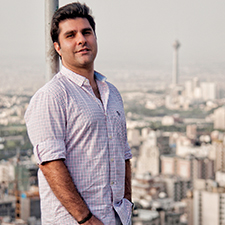 Nassim Soleimanpour is an independent multidisciplinary theatre maker from Tehran, Iran. His plays have been translated into more than 20 languages. Best known for his play White Rabbit Red Rabbit, written to travel the world when he couldn’t, his work has been awarded the Dublin Fringe Festival Best New Performance, Summerworks Outstanding New Performance Text Award and The Arches Brick Award (Edinburgh Fringe) as well as picking up nominations for a Total Theatre and Brighton Fringe Pick of Edinburgh Award.

Nassim’s second play Blind Hamlet for the London based Actors Touring Company premiered at the 2014 Edinburgh Festival Fringe and has since toured extensively around the UK and was received well in Bucharest and Copenhagen. Nassim now lives in Berlin with his wife Shirin and dog Echo. BLANK is his third play and premiered in November 2015 simultaneously in Amsterdam, Utrecht and London.