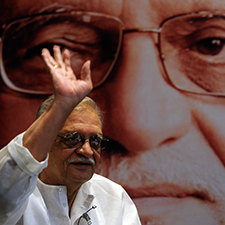 A man of many facets – poet, filmmaker, lyricist, writer – he was born in Deena, Jhelum, now in Pakistan. He was closely associated with the Progressive Writers Movement. Several collections of poems, short stories, and scripts have flowed from his pen. He has received both national and international acclaim for these works. His creative repertoire also includes plays, ballets, music albums and serials. He has also been the recipient of prestigious National Award seven times, not to speak of the 21 Filmfare Awards that he has won. He is also well – known for his books for children. His works have been translated into many languages. He won the Sahitya Akademi Award for the best Urdu Writer in 2002 and was conferred Padma Bhushan in 2004. He was awarded the Oscar, Academy Award for best original song Jai Ho (Slumdog Millionaire) in 2009. He is the recipient of 27th Indira Gandhi National Integration Award in 2012. He is presently the chancellor of Assam University