The Man Who Invented Poetry

The violence and passion of Afzal Ahmed Syed 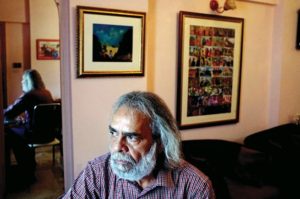 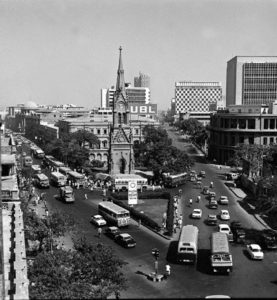 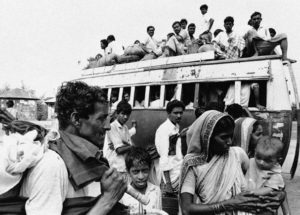 My first encounter with the work of the Karachi-based Urdu poet Afzal Ahmed Syed left me feeling like I’d been handed a beautiful, breakable object with jagged edges, glazed with a grief that is at once intimate and public. Or like standing in front of a wall crowded with a riot of miniatures, hundreds of images telling stories that are compelling but fractured, weighty but whimsical. This was one of the most remarkable voices of contemporary poetry in the subcontinent, and I was surprised I hadn’t heard it earlier.

I was not alone in my excitement over Syed’s Rococo and Other Worlds, which appeared last year. There is an enthusiastic recommendation on the book’s back cover by his fellow poet Arvind Krishna Mehrotra: “One reads Afzal Ahmed Syed’s poems first with disbelief, and then with more disbelief. He lives in Karachi, but it could as well have been Cracow.” Indeed, it could as well have been Mumbai or Delhi.

Consider the first poem in the collection, ‘Our National Tree.’ It refers to the acacia—known as keekar or babool in Hindustani—and the poet announces peremptorily that it ought to be the national tree of Pakistan. He juxtaposes the humble, thorny plant against the delicacy and fragrance of “white jasmine” and the leisure and plenitude suggested by “ikebana practitioners.” Then, without warning, he tosses in a brutal line:

The translation is sure to have lost some of the cadence of the original Urdu. Botanists, after all, sound nothing like mere botanists if you call them nabanaat ke maahir. Even so, there is no looking away from the striking imagery and the searing narratives. The trend continues in ‘Whom One Loves,’ where the poet begins gently, urging the reader to rescue the beloved from “a fading city/ on the last boat,” and then goes on to say:

For his innovations and the richness of his literary inheritance, Syed can be called a poet’s poet. But he is also a people’s poet, in that he bears witness. In essence, he is a storyteller. In shorter poems he tells stories of ordinary people, or of his own love. In longer prose poems, he tells personal stories in the form of medieval tales, borrowing fixtures such as scimitars, horses, boats, rivers, kings and nomads from classics such as James Frazer’s study of religion The Golden Bough and the Urdu fantasy epic Tilism-e-Hoshruba.
There is a dreamlike quality to Syed’s prose poems. Images and events come hard on the heels of other images and events, taking the reader to a point of logical suspension, as if between waking and sleeping. There is a sense of being trapped in an other-worldly realm, of not being able to pin anything down and yet being sharply aware of each emotion. ‘Sobia’ is one such long poem. At first glance, it seems to belong firmly to the world of fantasy. It could be a fairytale or fable, with its references to nomads and horses; but it also has a slippery quality, a fluidity of context aided by a free-flowing, almost breathless narrative style. By the end of the piece, the reader does not know whether Sobia, the poem’s title character, is a nomad or a princess, but does realise that she is acutely aware of power and its purchase:
When we met again, Sobia said, Of the slaves nomad girls are the cheapest, and of all purchased things freedom is the dearest; hedge my soul with thistles that my soul might never dream of escape ever, and do not put too great a store in love that love could begin any time you offered someone a fresh, red apple
If violence is the left ventricle in the heart of Syed’s work, love is the right one. The poem pours itself seamlessly between these two. Sobia offers to tell the narrator’s fortune at one point, ending her prophecy thus: “before you are hanged from your heels and lynched, someone would have loved you once.”
Later, in the same poem, Sobia peers into a deserted well and asks: “Is this water imprisoned here or is this its abode?” The narrator responds by saying: “Water has a nomadic existence.”
Rootlessness and nomadism form another conjoined thread running through Syed’s work. In a poem titled ‘The Genres of Poetry,’ the narrator describes writing itself as a form of unsettled life. Horses, too, seem to haunt Syed, for they appear in several poems. I asked him if he felt a special connection to the animals, and Syed confessed that he idealises them. “They are beautiful creatures blessed with immense physical power, and yet, they do not harm other creatures.” He dwells upon humanity’s complex relationship with horses in a poem titled ‘On a Political Party Being Allotted the Horse as Its Election Symbol,’ where he urges the horse to “get under the Amazons’ thighs; unseat Nelson at the Trafalgar … do not submit your mane to the lawn mower.”
While prose poems such as ‘Sobia’ leave one grasping for a handhold, other poems are rooted in recognisable events and characters. Dozens of Syed’s poems serve as portraits of individuals; it is interesting to note that most of these characters are women. But the poet’s gaze does not merely rest upon women’s beauty—it turns equally to their joy, vulnerability and their place in the world. There are famous women such as the Argentine first lady Eva Peron, the French queen Marie Antoinette, the Greek deity Aphrodite, the Egyptian queen Cleopatra and the British writer Aphra Behn. There are also ordinary women such as Stella D’Cruz, who dies in hospital leaving unpaid bills; Pragat Agarwal, who is a bank teller; Porochista Dastur, who buys beef in Karachi’s Empress Market; Miriam Kenskivic, who is in a labour camp; Hala Faruqi, who features in a sex tape and ends up in police custody; and an unnamed “courageous girl” in Iran after the Islamic revolution.
The poet draws much inspiration from the news. The poem about Eva Peron, he told me, was inspired by a newspaper report about the Argentine president, Juan Peron, keeping his wife’s embalmed body; the report mentioned the fact that there was an ornamental pin in her hair. This detail captured Syed’s imagination and, in the poem, he uses the image of a rusting pin in the head of a corpse to take an ironic look at the lives of the powerful. News snippets about torture cells, a capsized ship, the process of naming satellites, the delay of an academic year—all of these inspire him. But Syed seems equally invested in the past, asking questions about Cleopatra’s whereabouts on the night of Caesar’s assassination, harking back to the seizure of the Latin poet Virgil’s land, or recalling a captain in the army of the East India Company called Richard Burton, who happened to also be the first to translate the One Thousand and One Nights, the famous Arabic epic, into English.
Syed is a translator, too, and has recently published a rendering of the great Mir Taqi Mir’s Persian divan, or collection, into Urdu. The Persian influence appears to be quite strong in Syed’s own ghazals. One collection of them, Khaima-e-Siyah, was published in 1986, but is not available in translation. Farooqi says that although they are remarkable, the ghazals are, in his view, untranslatable.

Syed is, by his own admission, not a prolific writer. He is content to write eight or ten poems a year, and has published very little over the last decade, which is a pity. It would have been interesting to see how his work has developed in the decade and a half since the release of Rococo Aur Doosri Duniyaen, which is his most recent Urdu collection. The chances that he will publish a new collection in the near future are slim. When I asked if there was a new book on the anvil, he shrugged. “I’m writing but I don’t always like what I’ve written. If I don’t like the poem, I tear up the paper. I don’t save it in any form.” One indication of how high he sets the bar for himself is the fact that the poem that gives this translated collection its title, ‘Rococo and Other Worlds,’ is not included in it. When I asked why, Syed just said that, in retrospect, he decided that he didn’t like it so much after all.
Syed also rued the current cultural environment in Karachi. “There are no literary salons,” he said, “nowhere a younger generation of poets can go to find mentors and be exposed to new ideas and influences.” Educational institutions, too, seem to have been taken over by a politics that has little use for poetry.
I wonder whether the literary climate for poets is any different from this in Delhi and Mumbai. Certainly, many of our educational institutions are either indifferent to or suspicious of poetry. How and where do we find a new voice that can declare, with an ironic smile and a wink at the reader, “I invented poetry”? In the meantime, Rococo and Other Worlds is a rare and welcome addition to the South Asian literary pot. Many of the poems in the collection retain their currency decades after they were written. Take the poem ‘An Arrogated Past,’ which mentions targeted killings. When Syed wrote it, he was referring to attempts to kill Palestinian leaders such as Yasser Arafat in the Israeli siege of Beirut, in 1982. However, against the backdrop of the many killings in Pakistan in recent years, it is hard not to read a painful new meaning into lines such as these:

Between life
and ourselves
a great distance was put
and of that expanse
we were proclaimed citizens
In the course of our brief conversation, Syed gave me a metaphor to chew on. When I asked if he felt that his entomological work was a chore, he said no. “On the contrary,” he replied, “I find it quite interesting. Consider the fact that the smaller an insect is, the more adaptable it is, and the greater its ability to survive.”
Ever since, I have been wondering if Urdu poetry is like a small insect, trying to adapt to a post-industrialised, globalised world. It is constantly seeking new sources of literary nourishment, and surprising readers with new colours and patterns. At least for Afzal Ahmed Syed—the poet who wrote “I invented poetry,” only to follow it up with the beguiling line: “The mulberry seller invented the silkworm”—the metaphor seems an apt one.
Annie Zaidi is the author of Known Turf: Bantering with Bandits and Other True Tales and the co-author of The Bad Boy’s Guide to the Good Indian Girl. She writes fiction, non-fiction, poetry, and scripts and currently lives in Mumbai.

*The article has been reproduced here with the Author’s permission.