The cause of Problems – Ramachandra Guha

The cause of problems

– What some Kashmiris owe other Kashmiris

(Written for The Telegraph on September 3rd, 2016) 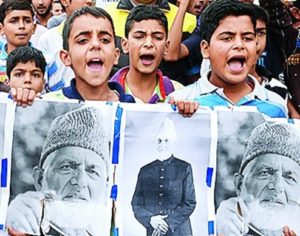 I was reading a recent interview with Adonis, the great Syrian poet who is frequently mentioned as a contender for the Nobel Prize in literature. Asked about the rise of Islamic fundamentalism in West Asia, and the violent conflict in his own country, Adonis remarked: “Nothing will change unless there is a separation between religion and the state. If we do not distinguish between what is religious and what is political, cultural, and social, nothing will change and the decline of the Arabs will worsen. Religion is not the answer to problems anymore. Religion is the cause of problems. That is why it needs to be separated. Every free human being believes in what he wants, and we should respect that. But for religion to be the foundation of society? No.”

In India, pre-eminent among those who would fuse faith and State are the ideologues of the sangh parivar. They have long wished to construct a Hindu rashtra, a State whose policies would be determined by what sants and shankaracharyas think or claim are ‘Hindu’ principles. This notion is rejected by the Indian Constitution. That has not stopped sanghisfrom actively reshaping public policies on what they deem to be ‘Hindu’ lines when the Bharatiya Janata Party is in power.

Adonis’s words were addressed, in the first instance, to the Muslims of the Arab world, too many of whom have fallen under the seductive sway of ideologues who seek to reshape societies and states on what they claim to be ‘Islamic’ principles. His warnings also apply, as I have suggested above, to Hinduism in India. And they also apply, with equal force, to that part of our country where Muslims are in a majority, namely the Valley of Kashmir.

In my last column (published yesterday) I argued that the Republic of India has much apologizing and atoning to do with regard to their abominable treatment of the Kashmiris down the decades. But in truth some Kashmiris have some apologizing of their own to do as well. This is with regard to the forcible expulsion of the Pandits by Kashmiris who spoke the same language, ate the same food, sang the same songs, but subscribed to a different faith, namely, Islam.

The tragedy of the Pandits was reported at the time by brave, independent-minded, journalists such as Sonia Jabbar. It has since been the subject of some moving memoirs by Pandits themselves (I would especially recommend Rahul Pandita’s Our Moon Has Blood Clots and the volume edited by Siddhartha Gigoo and Varad Sharma, A Long Dream of Home). These books document the threats, intimidation and outright violence, which led to the flight of the Pandits from the Valley they called home.

The evidence that the Pandits were purged by activists acting in the name of Islam is both credible and substantial. Yet among the Kashmiris who remain in Kashmir there is a wilful denial of what happened. Even educated and professedly ‘progressive’ Kashmiri intellectuals subscribe to a by now completely discredited narrative whereby the governor at the time, Jagmohan, is alleged to have told or even ordered the Pandits to flee. Others go further, charging that Pandits were agents of Intelligence Bureau and Research and Analysis Wing and thus deserved their fate. One article in the website, Greater Kashmir,went so far as to claim that in spite of “all the unconditional goodwill [sic] shown by successive generations of Kashmiri Muslims towards Kashmiri Pandits over decades if not centuries” the Pandits had (by allegedly allying with the Indian State) become “the tormentors of their own Kashmiri Muslim brothers”.

There is in fact a double denial by these Kashmiri intellectuals. The first has to do with the truth about why and how the Pandits fled. The second is with regard to the changing character of the movement for azadi in Kashmir. Once secular and trans-religious, this has acquired an increasingly religious cast. It is conducted, more and more, in the name not of Kashmir or Kashmiriyat, but of Islam.

There have been many horrific images coming out of the Valley in recent weeks. The most horrific perhaps have been of young boys, and sometimes young girls, blinded by bullets fired on them by Indian security forces.

These injuries, deaths and blindings of Kashmiri civilians shame all Indians. But let me now evoke another, less noticed image, carried by my hometown paper, Deccan Herald, and sourced to the photo agency, AFP. This captured a demonstration of young, fresh-faced, boys, some surely less than 12 years of age, each carrying a photograph of an elderly, bearded, man wearing a cap, a man who has for some years now been the chief ideologue of the struggle in Kashmir against the Indian State.

The man being idolized was, of course, Syed Ali Shah Geelani. What, I wondered, did these young boys, or their sisters, mothers, and fathers, know of Geelani’s views on religion, State, and society? To refresh my own understanding, I turned to an interview with Geelani conducted by the scholar, Yoginder Sikand, in October 2010, shortly after the last upsurge in Kashmir. Geelani squarely stated here that “Muslims must follow the guidance of Islam in every action of theirs – not just in prayers but also in matters such as war and peace, trade, international relations and so on, because Islam is a complete way of life”. Therefore, he continued, “if a true Muslim participates in any struggle, it is for the sake of Islam. So, how can you say that the Kashmir conflict has nothing to do with religion?” Geelani later added that “for such self-conscious Kashmiri Muslims, it is undoubtedly a religious issue and their sacrifices are for the sake of the faith“.

Geelani told his interviewer that Hindus and Muslims are “totally separate nations. There is no doubt at all about this”. Muslims could not live in Hindu-majority India, for, as he explained, “in the absence of an Islamic polity, it is difficult for Muslims to lead their lives entirely in accordance with the rules of Islam, which apply to social affairs as much as they do to personal affairs.” Therefore, concluded Geelani, the duty of Muslims everywhere “must be to work to establish an Islamic dispensation in the lands where they live so thatthey can lead their lives fully in accordance with Islam and its laws. Missionary work to spread Islam is as much of a duty as is praying and giving alms to the poor”.

Apart from this interview, Sikand wrote an essay entitled, “Jihad, Islam and Kashmir: Syed Ali Shah Geelani’s Political Project”, published in the Economic and Political Weekly, October 2, 2010. Here Sikand quoted two telling letters written by Geelani. The first, sent in the 1990s to the then chief minister of Jammu and Kashmir, Farooq Abdullah, argued that “the Muslims are a complete separate nation on the basis of their religion, culture, civilisation, customs and practices, and thought. Their nationalism and the foundation of their unity cannot be based on their homeland, race, language, colour or economic system. Rather, the basis of their unity is Islam and Islam alone, and their belief that there is no God but Allah and that Muhammad is Allah’s prophet”.

In the second letter, written in 1993 to the then (as now) Pakistani prime minister, Nawaz Sharif, Geelani described Pakistan as the “land of the dreams” of “all Kashmiris” because it was “won in the name of Islam”.

Based on his conversations with, and study of, the Kashmiri patriarch, Sikand concluded that “Geelani appears wholly indifferent to the political aspirations of the non-Muslims of the state and to their apprehensions about the prospect of living as obviously marginalized and severely-discriminated against minorities in Pakistan if Kashmir, as he insists, merges with that country, or in the Maududist-style ‘Islamic state’ that he so passionately argues for”. To this I would add – if the status of minorities in a Islamic state would be bad, the status of (even Muslim) women may be worse.

Syed Ali Shah Geelani’s views remain unchanged since 2010. Meanwhile, his influence over the Kashmiri struggle has, if anything, increased, with those representing a less severe version of Islam, such as Mirwaiz Umar Farooq, and even those claiming to be inspired by Mahatma Gandhi, such as Yasin Malik, bending to his will. This of course reflects a more general tendency among Kashmiri separatism, which has increasingly acquired an Islamist cast.

By far the greater set of villains in Kashmir are the agents and instruments of the Indian State, who bear principal responsibility for the sufferings, past and present, of the Kashmiris. But the so-called freedom fighters are not entirely innocent either. By purging the Pandits (and then denying it), and by submitting to an Islamist view of their predicament, they imperil not just the present, but the future of Kashmir as well.

Were the great Adonis to acquaint himself with the recent history of Kashmir, I am sure he would have harsh words for the conduct of the Indian State in Kashmir. But I do not think he would spare those struggling for self-determination either. He would tell them, as he told his fellow Syrians, that while religion may be a source of individual hope or consolation, when it comes to social and political questions, “religion is not the answer to problems anymore. Religion is the cause of problems”.

*The article is published here with the Author’s permission.