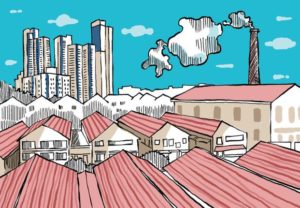 It appears that by now it’s well nigh impossible to de-link my two protagonists, Ravan and Eddie from CWD Chawl Number 17 in the public imagination. But the mother of all the chawls in Mumbai has been that complex of a hundred and twenty-one tenement buildings which went up in Worli in the 1920’s and another eighty-six in Naigaon, Sewri, and N.M. Joshi Marg. Bombay was already turning into a booming metropolis and desperately needed housing for locals as well as migrant labourers who came in the thousands to the city. So the Bombay Development Directorate (a.k.a. Bombay Development Department) got into the act and built the three-storeyed BDD Chawls. Each dark tenement was a 160 square feet with common bathrooms and toilet facilities on each floor. Often three generations, sometimes even four, lived under the same roof and at the same time. In all, the BDD chawls were home to 16,500 families.

The BDD prototype was duplicated with variations all over Mumbai especially by mill-owners who were heavily dependent on migrant labour. There was a time before the cotton-mills strike of 1980 when a chawl too would have three shifts of people staying in a room. The chaws have always been a mirror image of the city. Various castes and outcastes now called the Dalits lived cheek by jowl though tensions ran deep under the surface. In 1974 the BDD chawls witnessed the worst Dalit Panther-Shiv Sena skirmishes. Somewhere in the third novel of the R&E trilogy I mention that the CWD Chawls were built as solidly as the pyramids. What I had at the back of my mind were the BDD chawls. You have to grant our past British masters one thing. There was no compromise in their workmanship. Unlike their later compromised counterparts, the BDD buildings are monumentally strong and the 1974 disturbances did them little harm. Forty-two years later they are still in great shape.

By any standards the BDD Chawls are cramped, inhuman hovels. The two other major problems in the chawls have always been water and toilets. Here’s a short excerpt from The Water Wars from my novel, Ravan and Eddie: ‘…. the prime mover of life is water. You snapped out of anaesthesia, interrupted coitus, stopped your prayers, postponed your son’s engagement, developed incontinence, took casual leave to go down and stand at the common tap, cancelled going to church because water, present and absent, is more powerful than the Almighty….. The municipal tap is the original cornucopia. It is plugged into the mains and supplies water twenty-four hours of the day. Twenty-four hours as you know, is a flexi-time concept in our country, and can stretch between three to four hours. That’s on the good days. The timings are fixed. When the water comes, you know it’s come.’

And here’s a bit from Rest in Peace, the third novel in the trilogy, where Ravan and Eddie’s friend Asmaan is speaking: ‘I’ve yearned, and how, for a single toilet all to myself so that I could take a crap without ten or fifteen people knocking on the door telling me to hurry up even before I had squatted and often the knocking got so urgent, I had to close shop, barely managing to wash my arse. Don’t blush (Ravan), you too have been through the same. I wanted to pee to my heart’s content instead of always reminding myself not to drink too much water because then you can’t control the faucet.’

One of the most traumatic and overlooked tragedies of the BDD way of life was sex. The notion of privacy is totally absent in chawl life. Perhaps the most successful creation of the legendary Marathi humourist P L Deshpande was Batatyachi Chawl (the Potato Chawl). It is a celebration of the perpetually open and shared public life in chawls. But there is one taboo subject: sex. Remember that there are always anywhere between six to sixteen people lying almost on top of each other in a tenement. And yet what is never talked of in this sentimentalised version of chawls is the fact that sex in this set-up is always rushed, always stolen. There’s something underhand, unspoken and almost dirty about it. And the worst victims are almost always the wives.
The British colonizers were not interested in do-gooding and the amelioration of the local population. It is the nature of the beast called the colonizer to exploit the colonized to the hilt. In 1947 India won independence and the whole country, especially the poor chawl-dwellers, had good reason to think that in a few decades they would see better days. Surely their own leaders would recognize that even the poor have as much right to space, light, air and a full stomach as anybody else. And that architecture is about imbuing life with dignity. What they had not factored in was that their own leaders and politicians would turn out to be supra neo-colonizers who would seek every opportunity for their personal greed and gain to short-change their own people.

When the mill owners were finally allowed to sell their mill lands, the precondition laid down by the courts was that one-third of the land should house the chawl-dwellers who worked in the cotton mills. Now how demanding or rather, greedy can the poor get? The triad of politicians, real estate developers and the mafia grabbed almost all the land for fancy housing projects and generously packed the original residents into six-and-seven-storeyed, 200-or-250 square feet hellholes while building forty and sixty storied luxury high-rises next to them for the privileged and gated rich.
Over the decades one has often heard that the government would raze the BDD chawls to the ground and give more specious housing to the former residents. Talk and promises come cheap in our country while the BDD chawls march towards a centenary. Now once again there is talk of knocking them down and replacing the 160 square feet with five hundred or five hundred and fifty sq. feet apartments. Who knows, maybe this time the government means business. There is much jubilation, we hear, in the BDD Chawls. May I introduce a note of caution? Postpone the celebrations. Wait and watch whether all the talk is just hot air? Look at the small print, perhaps the right term is ‘invisible’ print. The real estate developers along with our wonderful leaders from every political party may very likely be planning to do you out of hearth and home.

*The article has been reproduced here with permission from the author.