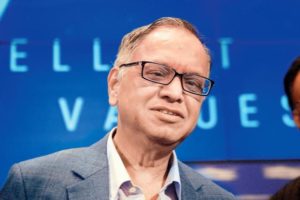 Regular readers of this column will know that Literature Live!, the little organisation I started, runs the annual Mumbai International Literary Festival every November. In addition, there are fortnightly Literature Live! Evenings when writers talk about their new books, or about ideas. There’s also the annual Independence Lecture, which is presented by JSW and held at the Oberoi Towers Rooftop.

This year`s speaker at the Independence Lecture, following in the footsteps of historian Ramchandra Guha, Reserve Bank Governor Raghuram Rajan and Chief Economic Advisor Arvind Subramanian, was Narayan Murthy whose name needs no appendage. What would he speak on? With Murthy, the choice is wide. First choice obviously would be Information Technology (which itself is huge – the Infosys story, the future of IT, how IT will shape the future etc). Other possibilities: Philanthropy (he has experience through his own philanthropy fund and he has had much to say about how our rich keep their riches to themselves) or the sad absence of technological innovation in India (about which he has been writing and speaking recently). Instead he decided to speak on City Systems.

He did so because the key to development is urbanisation, and we are witnessing urbanisation at a rate never seen before. A visitor to Mumbai can see this instantly: here`s a city bursting at its seams with its rapidly burgeoning population. Do city systems like infrastructure keep up with these demands? Ask anyone living in any city in India, and the answer will be No, no, no, no.

This underlines Murthy`s central point – that if India is competing with other countries for investments, we have to face up to the fact that “in today`s world, Indian cities are no longer competing among themselves. The competition for investment and talent is global. A company like Amazon or Infosys will evaluate the competitiveness of Bengaluru vs Manila or Shanghai before it decides to expand its operations. Similarly, Mumbai will have to compete with the likes of Hong Kong, Dubai or Singapore when it comes to a piece of global financial business.”

It`s significant that along with Amazon, Murthy mentioned Infosys, the company he co-founded and ran for years. When an Indian company goes global, it will not be swayed by appeals to patriotism: it will decide on investments by looking hard at several factors like advantages of location, size of market, stability of government decisions, available infrastructure and quality of life offered to its employees. Of all these parameters, Indian cities come out well only in one area – on the size of its market. Will that one advantage alone help a company decide to move to India?

In this connection, two figures given by Narayan Murthy are significant: “Indian cities account for barely 1% of the total fiscal wallet available to all governments where the global average is 7.5%.” The second was a comparison between Bengaluru and New York, both with approximately the same population (9 million each). But, according to Murthy, “New York employs over 400,000 city workers whereas Bengaluru has less than 30,000. It isn’t just a problem of quantity, but quality as well: close to 5% of New York`s human resources are qualified senior management – in urban planning, finance, infrastructure, mass transport and so on. Bengaluru has barely 0.5% and even this is mostly generalists, not domain experts.”

Finally, there is the vexed question of the political ownership of a city. Consider Mumbai, India`s financial capital, with a municipal budget that is bigger than the budget of many lndian states. In recognition of this, governments in Maharashtra have designated a minister for the city, but when you consider that the post has been held by people like Chagan Bhujbal, now facing myriad corruption charges, you know what that means. But that`s not the entire problem: the city has fragmented ownership. There`s the Municipal Commissioner who is appointed by and, therefore answerable to, the Chief Minister. There are the elected Municipal Corporators, the majority of who might belong to a different political party than the one running the state. Then there are the MLAs and MPs who win their seats from different city constituencies and, therefore, have loyalties to only those areas. Is there conflict in all this? You bet, and it shows.

Narayan Murthy`s solution to this is on the eternal wish-list of thinking Mumbaikars – a directly elected Mayor like London`s or New York`s with full powers and complete responsibility for the success or failures of his policies. Given the very unlikely possibility of this happening, Murthy suggested that as an interim measure, one office should be empowered and accountable for running the city. Even this means changing an entrenched system. Will anyone do it? I doubt it.

Narayan Murthy tried to end on a note of optimism, but I was thoroughly depressed at the hopelessness of it all. Unfortunately individuals, unlike companies, cannot move at will and pitch their tents whenever they think best. In short, we are stuck, and there`s no way to escape.