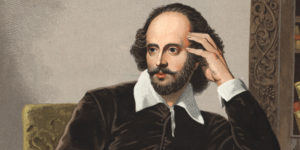 Stratford upon Avon in the summer of 2016 is the place to be. After all, this is Shakespeare’s birthplace and this is the 400th anniversary of his death.

The Bard, as Shakespeare is universally known, lived a reasonably comfortable life judging from his parental home which is here, as well as his wife, Anne Hathaway’s cottage. But if he could just see the industry that has grown around his name, and the fortune he generates, he would be staggered. Stratford is 800 years old and originally a small market town, and even today the local population is just around 30,000. But thanks to its association with Shakespeare, it attracts over 5 million visitors a year !

Yet the good citizens of Stratford didn’t quite realise the value of their legacy till the English actor David Garrick set up a temporary theatre in 1769 to hold a festival of Shakespeare plays which proved to be immensely popular. A series of temporary structures followed (and a permanent one proved to be not so permanent when it burned down). The Royal Shakespeare Theatre we see now was built only in 1932, while the Royal Shakespeare Company(RSC) that now carries aloft the Bard’s banner, was founded in 1961 by the charismatic director, Sir Peter Hall.

RSC celebrated the 400th anniversary in two imaginative ways. First by taking Shakespeare abroad, performing ‘King and Country: Shakespeare’s Great Cycle of Kings’ in Beijing, Shanghai, Hong Kong and New York. While New York is the obvious one there, what about the others ? Is there a special bond between the Chinese and the Bard , which we Indians, steeped in Shakespeare, didn’t know about ? The fault, dear Brutus, is not in our stars, but in our cash registers that we are underlings.

The second route was through ‘A Midsummer Night’s Dream : A Play for the Nation’, taking the production to 11 cities for one week each ( Belfast, Blackpool, Bradford, Canterbury, Cardiff, Glasgow, London, Norwich, Newcastle upon Tyne, Nottingham and Truro). But that’s not all : the play’s director, Erica Whyman took on the staggering challenge of collaborating with amateur companies in each of these 11 cities!

If you remember ‘A Midsummer Night’s Dream’, you will remember the play within the play which is performed ( atrociously) by an amateur company whose players are referred to as the mechanicals because of their day jobs.Now the amateur groups of these 11 cities played the amateur company of the play. All the 11 groups have now gathered at Stratford, where they get to play their roles on the big stage for two days each. What an opportunity ! The fulfillment of how many lifetime dreams !

‘Midsummer’s journey through the country not just take Shakespeare everywhere : the local involvement aroused a great deal of of media interest too. However for the 18 professional RSC actors, this posed a special challenge : as my daughter Ayesha who plays Titania tells me, she had to work with new groups of children playing her fairies in each city and even more, deal with a new Nick Bottom every week !

The inclusiveness that this production signifies has become an intrinsic part of British culture for some time now. Last year, RSC’s ‘Othello’, for example, had a black Iago, thus changing the racial equation at the centre of the play. This, as you can imagine, is quite a change from the time white actors played Othello in black face(Laurence Olivier was one of them). Now it’s gone to the other extreme : ‘Midsummer’s Hermia is played by a black actress and RSC’s next ‘Hamlet’ will be Paapa Essiedu, whose family comes from Ghana, though he himself is London born and bred. This inclusiveness extends to gender too : past productions(not just RSC’s)have featured a female Hamlet, female Mephistopheles and Faustus in Marlowe’s play, and in the present ‘Midsummer’, a female Puck.

If you are a traditionalist, you will no doubt blanch at these goings on. You would argue that Shakespeare never meant Hamlet to be anything but a white Danish male or that Marlowe’s two diabolical anti heroes were supposed to be white males too. But if a British actor plays the Prince of Denmark, and the colour of the British actor is not white, what is the problem ? As for changing the gender of characters, it makes no difference to a role like Puck. But Hamlet ? That’s going to alter a lot of equations.

Will Will Shakespeare, the Bard of Avon, be turning somersaults in his grave ? I doubt it. He would be amused and intrigued by these directorial flights of fancy which give new perspectives to his plays; he might be astonished at how Macbeth became Maqbool, Hamlet became Haider, Othello became Omkara. What we can say four hundred years on is just this : all these are reasons why Shakespeare is not of an age, but for all time. And he is not just for Stratford or Britain, but for everywhere.