Cindrella Paradie
Cinderella in the modern world. He is the step brother of Sheldon, Zenior, Dylan and Calvin. Cinderella is burden with all the work at home and has no social life. He goes to college every day and comes home and does all the house work and the homework of all brothers.
He is bullied by his brothers and their friends. One day he was beaten and thrown near the dustbin there, he finds a pass to mask jhankar party. On the day of the party, his brothers dress up and leave for the party loading him with lots of hour work. Cinderella starts doing the work and suddenly he finds out that he’s not alone. Surprisingly a fairy appears. The fairy asks him why he is not going for the party. He says he doesn’t have good clothes and shoes for it. The fairy casts a spell and BAMM! He is well dressed, in a total party attire. She also gives him a magnificent ride to go to the party. The fairy warns him to be home by sharp twelve, or else al his clothes will shrink, and also don’t tell anyone about me.
At the party he doesn’t know what to do. He begins to look around.  Suddenly someone taps him on his back. He turns back to see a pretty looking girl. She asks him for a dance. They dance for a while. The girl falls in love. And he is mesmerized by her beauty. He gets a phone call and she stops dancing and moves to the side to answer the call. As they time flies when you are having fun. He looks towards his watch, and it’s almost twelve. He reaches for his ride and off comes his shoe. The girl finishes her call and searches for him everywhere, only manages to find his shoe.
The next day the girl for the owner of the shoe everywhere but finds him no where and begins to cry and takes out a tissue and begins to wipe her face. Cinderella is beaten up again as usual and sitting besides the dustbin. Cinderella recognizes the shoe in her hand and ask for it. She realizes that he is the owner of the shoe. She confesses her love for the shoes and ask him from where he got the shoes. Cinderella says linking road.
MORAL: Forever alone. 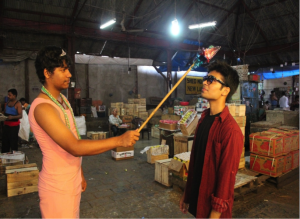 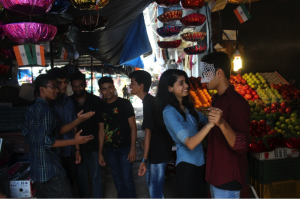 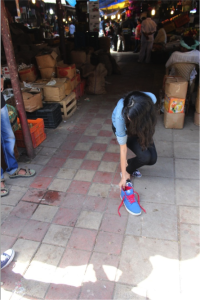 By Joshua Fernandes and Jamie D’souza