Here’s the thing about smoking in Kasol. You shouldn’t do it.

He took three intermittent breaks to catch his breath, along the – what the locals typically called ‘Pandraha-foot maap’, or The Scale of 15 feet. Your average joe could scale the road with unremarkable long strides of 15, they would reason. He was not your average joe. With a cigarette in one hand, and a bottle of water in the other, both consumed in panic-stricken palpitations, it wouldn’t be a stretch to say he was doing this hiking thing all wrong; he was a below-average, if you must.

In, what can only be perceived as inane irony if anything, he, infamous for his fear of dark alleys, and even darkened heights, chose Kasol as his reclusive quarantine. With sparsely lit streets, and the never ending up-ways straining the very best of his soot-puffed limbs, one wasn’t wrong in deeming his recurrent huffs as but a sign of lingering temper. For him, Kasol posed not as a capable benefactor. But in its defence, it pretended not to be anything at all, but what it really was. A village, as much acclimatised to quietude, as it was to its naturally blessed highs and flows.  When yogi enthusiasts, who claimed acquiescence with the neanderthal world, made it their home due to its perceived spiritual bearing, it wore that estimation as well as its hills wore the clouds on disturbed nights. It made do. Much like he didn’t.

He trudged along like an animal made not for a pristine jungle as such; what was a far cry from the inert plasticity of the city he left far behind, in desperate urgency. His creative reasoning, an erstwhile well-oiled machinery, had been overcome by pressing calls for deliverance for a prolonged period, now. And when have clamorous deadlines ever copped befitting work? Rarely, he’d have quipped, if asked.

So, this is it, is it? A cigarette, some solitude, with a room up on the hill, even further than the already-furthered village?

Pretty much. I’m not exactly alone really – there is this book here that I’m reading. Rather Kafkaesque, if you care to know, and there is music. This blanket I carried along has been a good companion – and there is you.

That’s what we have here. Semblance of art that embodies your inherent manifestations, and a cloth of the rarest velvet to give company on a lone night. Quite romantic, if you ask me. But why am I here?

Indeed, why are you here?

Much before this evening had actually materialised, he swore to abort any resisting connection to what was past. Such was his solemnity that he chose not to carry any machine that would enable the contrary. Yet, he couldn’t quite shake her off. She followed, despite the early resistance, with chaos, noise, and that peculiar smell that’s hard to miss. The smell that reminded him of the sea, that remained in the clothes after several washings, and that, which carried the dense volume of civilisation. Like the blast of pungent breath escaping train bogies as they empty off their remnants. It was of pungent variety, this smell. And hard to let go. Despite the hatred, you almost missed it when it was gone, if it ever did manage to leave. The smell at Kasol, on the other hand, bore a purity that was undeserving of its guest, like it had to be earned. And that he had failed in his earnings.

She, seamlessly, had no bearing on his conscience. Almost as dirty as the random spurts of violent thoughts that never bore fruit, she seemed like an able compatriot. She was, perhaps not the influence you want, but the enemy you would avoid, at every opportunity. The friend you would call, should you have murdered someone. The one who would soak in your darkest confessions, your deepest guile, and puke it all out to its sea, which did the washing – the cover up. Not as significant a cover up, as she would have you believe, but pretty soon you’d find her answerable to yet another benefactor, and you’re but one of the many she pretends to nurture. And she pretended, just fine.

Because he sought peace in her discord. His dilemma, was not a mind overcome by the city, but the city itself. And like any self-loathing artist, he wore his dilemma like a proud muse on his sleeve. Kasol was not a respite to a glutted mind; it was much rather an advocate. Between the city he carried, and his own creativity. A fresh medium, that was to introduce dialogue he hadn’t quite considered. Kasol was never the subject, but a mere, fleeting participant in a scene that had been written for, and enabled by, her, Mumbai, the city itself.

So, is smoking on such a high altitude, that would curtail your breathing further, a creative experiment too? 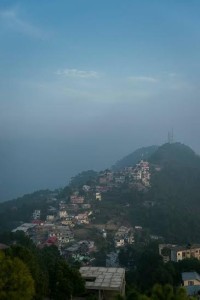